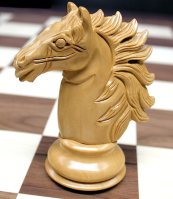 To the (maybe) one of you who read this blog, I’d like to say how excited I am.  Tomorrow is the first tournament in my husband’s chess career in almost 10 years.  We’ll be leaving for KC in the early afternoon (after getting new tags for our license plates because we can’t afford to get another ticket and it’s been more than a month since they were supposed to be renewed) and Josh will be registered and ready to rock (in a chess sort of way) by 7pm.  As you can imagine, he’s all geared up about this thing.  It’s part of his plan for life: become a master woodworker, get a degree in some field of science related to physics and astronomy (astrophysics, perhaps?), become a chess grandmaster.  And, like woodworking, chess is in his blood.  Josh’s mom has told me stories about how her mother and father (straight up German, accent and everything) would sit in silence for hours completely focused on a game.  Josh’s mom knows how to play chess, but never really fell in love with the game because, like Joshua, her father didn’t see any good coming from letting someone win.  “How will you get better if I let you win?”  Logical.  I’m usually good for three or four games before I get so upset I don’t want to play anymore (which is part of the reason Joshua doesn’t like to play with me), but Josh can play and lose a hundred times without taking it to heart.  According to him, losing is a learning experience.  (He’s definitely not a Hudson.)

I know for a fact that my husband has the ability to become a grandmaster.  What I don’t know is if he really wants to.  Like everyone 30 years older than their age, Joshua’s hell-bent on reasoning out his purpose in life. “Chess is just a game.”  That’s what bothers him.  Would God put him on Earth just to play a game?  That’s not a question I have an answer for or even a compelling argument.  When Josh begins to doubt his direction, I just ask him whether he thinks God would have created him with endless cool-headed logic, foresight, and a dispassionate point of view for no reason.  Me, I’m different.  I’ll never be great at chess because a game is personal for me.  The same goes for an argument about science, history, or decision-making.  I can’t separate my emotions from even insignificant things, but Joshua can.  I’ve called him Spock before, and with good reason.  He has the ability to be great.  I hope the tournaments we go to this month show him that and help him decide if chess is the path he’s supposed to go down.  I also hope he wins, but what wife wouldn’t want that?