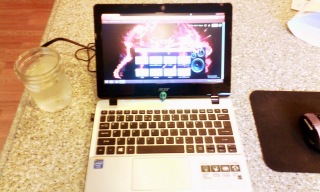 Near the beginning of the summer, my old computer began having what people in the tech biz refer to as “freak outs.” The screen would go black and the Caps Lock key would start flashing, which it turns out is really bad. (Don’t worry. This isn’t a horror story about losing tons and tons of files. After the first twenty times my computer freaked out, I wised up and transferred everything from my computer to a secure location.) Last month, my computer finally gave up the ghost for good.

Now, it just so happens that September, October, November, and December are the only months out of the year where all of our biggest bills are due, the months when we actually plan to have no money and scrape by eating all the weird stuff that accumulated in our freezer and on our shelves over the previous eight months.

But this year, not only did we not have the money we planned not to have, we also didn’t have the money required by several surprise things that popped up. Replacing the bald tires on our truck, getting a new part for the furnace, and so on. No matter what kind of fancy fund-work we tried, there just wasn’t a way to replace my computer until Josh got his Christmas bonus.

For a while, I tried to figure out typing on my phone. After that, I went back to my high school days and wrote in a notebook. (Imagine!) But not being able to write the amount that I’m used to writing in the time I’m used to writing it in a good ol’ fashioned word processor was killing me. I didn’t complain or throw any overt fits, but Josh noticed I was depressed, upset at myself, and entirely at loose ends. When you share something as deep and meaningful as a nightly tour of Skyrim, it’s hard not to learn to pick up on your spouse’s moods.

Last Tuesday, Josh came home and slapped a check on the counter.

“We’re buying you a new computer,” he said.

“I asked if I could work the next four Fridays and get paid up front,” he said.

To fully understand this, you need to know that near the beginning of the year, Josh started going in at five every morning and working through lunch every day so he could come home at three and have Fridays off. He did it so he could spend more time at home with the boys and me. For him to sacrifice four of his Fridays to buy me a stupid computer was too much.

All I could do was ask him why.

He shrugged. “I want you to be able to write.”

A: When it’s physical proof that I’m loved and supported by one of the best men in history, a man who is constantly sacrificing for my dream. Something I already knew, by the way. But now you know it, too.