When I was younger–from about junior high to my sophomore year in high school–I did this kind of end-of-the-year ritual every Dec. 31st involving lots of weird things.  Sometimes they were things I was afraid of, but usually they were just things that I wanted to get done but never had.  One year I finished my first book. (It took up the better part of two notebooks and was written entirely in pencil.)  One year I climbed to the top of the silo.  (That was 1999, I believe.)  Things like that.  Personal triumphs.

Why don’t I do that anymore?

Well, for one thing, I’ve seen and done a lot.  Anymore, the only things that scare me are some harm coming to my family and the dark.  There’s really nothing you can do for that.

Second, a personal triumph for me nowadays would be to finish washing all the dishes on the counter. As you can see, now that Oak is walking, my Time Pie-Chart is divided much differently than it used to be.  I never spent much time before doing housework, but with all the time I spend now searching the house for my water bottle (which Oak for some reason likes better than Joshua’s water bottle), stopping Oak from eating cat food, and doing vague internet research to fuel my stories, there just aren’t enough degrees left in the circle. 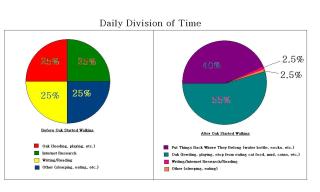 Also, chronologically and as far as writing is concerned, I’ve grown up a lot since I finished that first book.  I realize now that you can’t finish a piece in a certain amount of time, you have to finish it in its own time.  If you try to rush something to meet a deadline, more often than not you’ll end up with junk.  If you let it get done when it gets done, you’ll probably have a masterpiece on your hands.

Lastly, in my old age, I’ve developed a deep and passionate hatred of the cold.  I don’t want to go outside in winter.  I don’t even want to live in a place that has winter.  So doing outside things on December 31st is out. I don’t think I even stayed up until midnight this past New Year’s Eve.